.
.
My father, grandfather and great grandfather came to the "Gold Mountain" many decades ago. From the 19th century there was a world-wide migration from Southern China as immigrants looked for a better source of income to support their families.  Immigration to Canada was very difficult. There was a strong racist effort to keep Asians from joining our society. Chinese men were allowed into the country only if they paid the "head tax" which was equivalent of a year's wages. They were not allowed to bring their wives and family. As a result, they worked extremely had to earn low wages to pay off the head tax and to send money back to China to support their families.

My grandfather saved enough to buy a hotel, but because of racist policies could not obtain a license for a beverage room. My dad, Soo Choy, opened a restaurant in the small prairie town of Newdale and earned enough over the years to send money back to his family and to make periodic journeys back to the homeland. Following each journey home another child was added to the family back in China.

During Soo's visit back to China in the early '30s he built a large three-storey house for the family. This ornate structure was constructed with large timbers and solid cement blocks. The Choys were land-owners so the house was surrounded by an orchard, garden, bamboo groves and rice fields.

My mom, Jade, raised five children here. She survived storms, droughts, famine, Jap army invasions, WWII turmoil and bandits. The security of the home was provided by a high wall and upper gun turrets. Jade not only cared for the fields, home and family through these hard times, but also was very generous in helping neighbours in need. She made sure that the kids were sent to Hong Kong and neighbouring cities for higher education.

I was born in 1948. In 1950 the Communist Revolution made our existence there unbearable. Because the Choys were landowners, the new government took over ou lands and confiscated the home for government offices. Mom arranged for a neighbour woman to smuggle two-year-old me among her children out to Hong Kong since she had permission to move there. I would live with my grandparents. Later, my mother tried to follow, but was captured as she attempted to wade across the river into Hong Kong at low tide. She was imprisoned for some time and the family lost all contact with her. Eventually, funds were sent to obtain permission for her to move to Hong Kong. It would be many more years before Canadian immigration policies changed -- starting with the abolishment of the Chinese Immigration/Exclusion Act -- and my mother and I would be allowed to join father in Canada in 1958.

Meanwhile, because the Choys were landowners, the house, sans land holdings, was eventually returned to family. Relatives moved in and these families still live there today. The house was very well built and has survived the years and conflicts quite well. It was a dream come true when my husband Bill and I travelled to China to visit my birth home in April 2017.

Canada opened wonderful opportunities for me and my family. Our Website www.hillmanweb.com gives some idea of some of the successes this wonderful country has made possible for me. My husband has shared his perspective below of how Canada has allowed my life to blossom. Thank you Canada:

Sue-On
sueon@westman.wave.ca
"MY PRINCESS" by BILL HILLMAN
www.hillmanweb.com/princess.html
She was two years old when her mother pressed her into the arms of a fleeing neighbour woman who had wrangled a pass to Hong Kong. With her mother detained by the newly-empowered Communist Government in Canton, and her father in the far-away land of the gold mountain, the world suddenly became a terrifying and lonely place to this toddler. Even after her mother managed to join her in Hong Kong, it would be eight more confusing years until the family could be reunited in Canada.

It was an alien, hostile land which greeted the little girl and her mother after the days-long airplane journey: huge cars, bewildering mobs of go  bays who all looked and sounded alike -- greasy, smelly foods -- miles of endless highways stretching across a flat and barren countryside of ice and snow... a cold and a wind which hurt her face, her ears, her hands and which, for some reason, tied her stomach into knots... and an endless trip across this land to another new home -- a house and restaurant in a place with an unpronounceable name: Newdale.

She had ranked above all the other girls in the Catholic School back in her warm Hong Kong but here she found herself pushed in with little six-year-old girls... and boys -- everyone in the school stared, snickered, and talked that strange babble behind her back -- and no one could understand anything she tried to say or do.

For the next seven years every waking moment outside of school hours would be spent working in the restaurant -- The Paris Cafe (her grandfather had named it many years before). All the drama of her little world - family life, social life, homework, relaxation -- and her indoctrination into this O so foreign rural farm community -- would play against a backdrop of high wooden booths, counters and stools, magazine and grocery displays, and a Specializing in Chinese and Canadian Dishes kitchen.

The work was hard and long -- there was endless preparation of food, shelves to be stocked, orders to be served from 7 am to 11 PM, and a daily supply of water to be dragged from the town well. She fell in love at 15 with a local musician and they married when she turned 18. She and her husband attended university and performed nightly in Brandon nightspots for enough years to garner five university degrees and to become high school teachers and university profs. She travelled and performed across two continents, bore three glorious children, and excelled in cooking, gardening, crafts, karate, music, motherhood, and as a person.

To this list of accomplishments she has added the role of restaurateur, as she and her husband owned and managed SOOS  a 265-seat restaurant in downtown Brandon for 10 years. Following the sale of the restaurant in 2002 she took a teaching position at Brandon University.

This little-smuggled-waif-turned-beautiful-woman is the most amazing person I have ever met. She is an inspiration and a source of wonder to all who have been touched by her aura.
I have been touched. .... I married her... " 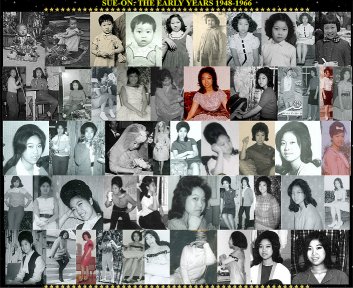 Visit to Sue-On's Birth Home that she left when she was two years old
www.hillmanweb.com/china2017/home0.html