A WWII Scrapbook
I. The Early Years 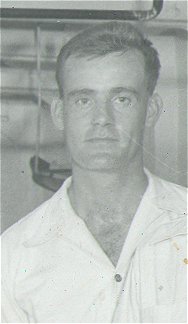 I was raised in Elrose, Saskatchewan -- in the middle of the Canadian prairies -- in the 'Dirty 30s' -- which I guess instilled a fascination for the sea. In fact, I had applied for the Navy two years before I got in. I was the only one in my family to join the Navy -- two of my brothers joined the RCAF and two joined the RCA.

My training was on the West Coast in Esquimalt and Comox (Engineers training) from where I was posted to Halifax on the East Coast.

It was there that I married my fiance, Louise Campbell of Strathclair, Manitoba, on May 27, 1941. We lived in Halifax until my posting to Newfoundland in February, 1942. At about this time I Switched from being a Stoker with the Engineers to the Shipwright Department in St. John's where I worked at ship repair for 2 ½ years. 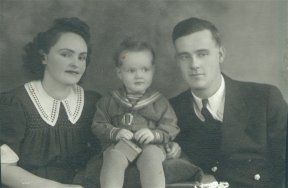 I was then posted back to Esquimalt on the West Coast where I worked as an instructor at the Training Establishment. Following this I volunteered for duty on the HMCS Prince Robert as Ships Blacksmith. A shipwright friend from Newfie had asked if Id go with him on this adventure. My goal had always been to serve on a ship in the war effort, and realizing also that if I didnt spend time at sea I wouldnt be in line for promotion, I signed up. The hardest part was leaving my wife and two year-old son behind.

After the shakedown cruise we left Victoria for San Francisco where we added more armour to the ship.  I did a tremendous amount of welding on ship so I came to know every part of the vessel. It would be quite interesting now to see the ships plans to bring back a few memories. We were all very proud of the ROBERT. Sadly, following our return from the Pacific, the ship was sold and eventually ended up as an Italian luxury liner.

Steam ahead to Pt. 2: Shakedown Cruise