No. N/A
Executive Officer and Damage Control Crew
Front row from the right: Shipwright ~ Head Shipwright ~ Executive Officer of the ship ~ Painter ~ Jerry, the Ships Blacksmith.
Those in the back row are all helpers with a Shipwright in the middle.
I weighed 145 pounds having lost a lot of weight from the tropical heat, lack of food and the heavy work schedule.
We were very busy all the time. I found it particulary hard since I dont eat fruit and salads, the main foods in the tropics. (September 1945)

PR337
Admiral Beach boarding Boarding the Prince Robert
Admiral of the Fleet (British) being piped aboard the Prince Robert.
He switched from ship to ship.
A ship would fly his flag if he were aboard. (November 16, 1945) 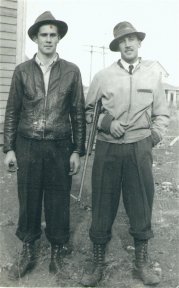 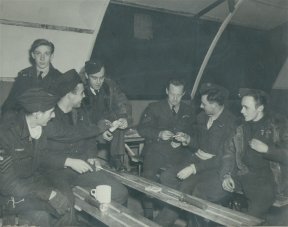 Louise and Jerry with children
Bill and Bonnie and their families (1980)
Steam ahead to Pt. 7: Specs Sheet