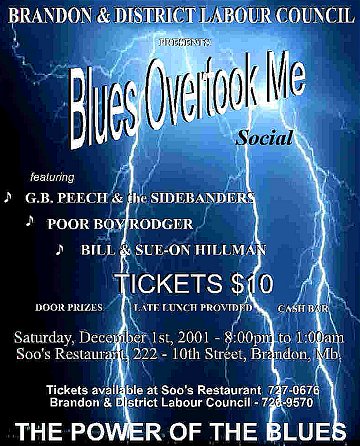 
THE SOO'S DRAGON
Appearance at this year's
"Save The Children" Parade

INSIDE THE DRAGON
Four members of the SOO'S staff

Brandon Sun Photo Feature ~ Jan. 29, 2001
"A man is silhouetted against a large mural at SOO'S Restaurant.
The restaurant held a banquet to usher in the Chinese New Year, the Year of the Snake."

Only $12
(Children Half Price)


Qi-Gong [chee gong] is a part of the tradition of Chinese medicine.
It is a practise which incorporates
breathing, posture, movements and meditation.

Master Michael Shen, BA, MSc, is the vice-chairman and
Canadian president of the International Qi-Gong Association.
He has been a practitioner and instructor of
Qi-Gong for over 25 years.

Read the full feature article
from the Vancouver Sun
HERE

Photo by Colin Corneau ~ Brandon Sun
Brandon Sun ~ March 18, 2000
"Robin Hillman blows some last minute notes
before taking the stage at the Centennial Auditorium
at the start of the 18th annual Brandon Jazz Festival.
Hillman was playing his trombone as part of the
Brandon University Jazz Ensemble."

SOO'S is a regular sponsor of such music events.

SHOULD YOUR BUSINESS BE ONLINE?
Bill and Sue-On Hillman sent an e-mail last week
expressing their opinion on fan sites due in part to
their involvement with an Edgar Rice Burroughs site that they maintain http://home.westman.wave.ca/~hillmans/intromq1.html

What I was particularly impressed about with their site is that
the Hillmans, who own Soo's Restaurant in Brandon,
have their buffet menu online and it appears to updated weekly.
Also included is the take-out menu and the dining room menu.
What an excellent way for a Brandon business to grab technology and
turn it into an inexpensive advantage.
I've bookmarked the buffet page
( http://www.hillmanweb.com/soos/menubuff.html ),
and rest assured I'll be checking out the menu next time
my stomach lets me know it wants buffet.