Please visit our
Online Scrapbook
to see our team in action.

Tuen Ng, the Dragon Boat Festival, occurs on the 5th day of the 5th month and commemorates the attempt to rescue the patriotic poet Chu Yuan, who drowned on that day in 277 B.C. Unable to save him, the people threw bamboo stuffed with cooked rice into the water so that the fish would eat the rice rather than the body of their hero. To commemorate this, people eat tzungtzu, rice dumplings filled with ham or bean paste and wrapped in bamboo leaves. The boat races on this day attract large crowds. These races not only symbolize the people's attempt to save Chu Yuan, they also demonstrate the Chinese virtues of cooperation and teamwork. The boats are large canoes, usually highly decorated.

The Dragon Boats feature the head and tail of a dragon, a mythological creature regarded by the Chinese as having dominion over the waters and exercising control over rainfall. The heads and tails are kept ashore during the year and are only affixed for the races. After they have been attached, it is necessary to bring the boats to life. This is done in a ceremony presided over by a Taoist priest and, amid the burning incense and exploding firecrackers, the eyes of the dragon heads are dotted with paint.  Sacrificial paper money is put into the dragons' mouths and also thrown into the water by the rowers. All of this is done to dispel any evil spirits that might be lurking about waiting for an opportunity to disrupt the festivities.

Dragon Boat racing is fast, exciting and spectacular. Normally each team is made up of 22 people: 20 paddlers, a drummer who tries to keep them in time and a sweep whose job it is to keep the boat in a straight line. The object is to paddle the 12 metre dragon boat down a 300 plus metre course. Style and rhythm are more important than raw power.

The Dragon Boat Festival is an entertaining and enjoyable event. It gives the observer an opportunity to glimpse a part of the rich Chinese cultural heritage. 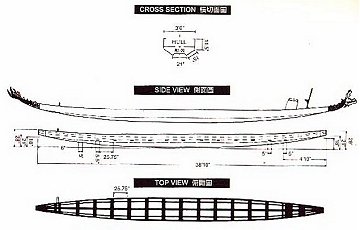 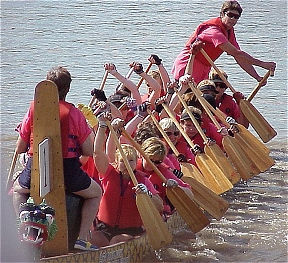 The Chinese dragon boat races will always be a symbol of Chinese culture and spirit. As one of the three largest Chinese festivals of the year, this mythical celebration can now be witnessed around the world. To experience a dragon boat race - either watching or participating - is a thrill in itself and can be enjoyed by everyone.

You'll watch as long, multicoloured boats, with frightening dragons' heads, long tails, and scaley bodies, splash through the water. You'll see men, women, and children grunt and sweat as they push themselves harder and faster to be the first to the finish line. You'll hear the crowds screaming and cheering for their favourite team, while the drummers pound on their drums and yell at the paddlers. The event is not intended to be quiet and peaceful but loud and exciting - a celebration!

To observe the Chinese dragon boat races of today, you can only dream of its meagre beginnings. A time when superstition determined how a person lived. In fact, dragon boat racing began more than 2000 years ago when a group of superstitious people believed that the boat racing would ensure prosperous and bountiful crops. Their celebrations took place on the summer solstice - the time of year typically associated with disease and death and when man felt most helpless against the powers of nature. The race has come to symbolize both man's struggle against nature and his fight against dangerous enemies.

The tragic tale of Ch'u Yuan further integrated the dragon boat races into the lives of the Chinese. Fourth Century B.C.E. is known as the period of the "warring states" in Chinese history. It was a time when numerous supremacy wars between feudal lords erupted. Many kingdoms had already disappeared, except for Ch'u, which was one of the mightiest kingdoms remaining. Ch'u Yuan was a poet and a minister and councillor to the king of Ch'u - truly a great patriot. He feared for the future of his kingdom and to do the best for his country, he gave advice to the king. To his surprise, the advice was not accepted and he was exiled. At the devastation of the kingdom of Ch'u and his exile, Ch'u Yuan, in desperation and sorrow, threw himself into the Mi Lo river.

The people of Ch'u loved Ch'u Yuan. They grieved over his death and spent much time trying to scare the fish and water dragons away from Ch'u Yuan's body by rowing around the river in their fishing boats, splashing their oars, and beating their drums. And to ensure that Ch'u Yuan never went hungry, they wrapped rice in leaves and threw them into the river. Rice cakes are still eaten today as part of the dragon boat festival celebration.

The dragon boat festival is typically celebrated "the Fifth of the Fifth" - the fifth day of the fifth month. Red is the prominent colour on the boats because it is the colour of the number five and symbolizes heat, summer, and fire. The lengths of the boats can range between 30 and 100 feet but are wide enough to barely fit two people side by side. Some of the original rituals are still practiced today, like the "Awakening of the Dragon" by dotting the eyes of the dragon's head on each boat. This ceremony is conducted to cleanse and bless the area of the competition, the competitors, and their boats. It also gives the boats and their crew the strength of the Dragon and the blessing of the Goddess of the Sea.

Nevertheless, much has changed in the festival. The crowd no longer throws stones at the rival boats and it is not imperative a boat capsize and at least one person drown - which was considered a special sacrifice to the gods and was, surprisingly, a sign of good luck.

Today the dragon boat races are primarily a form of amusement. It is no longer a necessary ceremony performed to scare away evil and call for a good year but entertainment that teaches people a little about Chinese history and culture. We are not nearly as superstitious as we were in the past but it sure is fun pretending!

What if Dr. Seuss Wrote Dragon Boating Poems?
By Dean Baker of the Pacific Dragons

If your paddle hits a poodle on the doodle at the race.
And the starts for all the races are the usual disgrace,
And the call from all the paddlers is to now bring down the pace,
Then the poodle's paddled doodle will be redder than his face.

When the paddle hits the water it is bound to make a splash,
And when timing is atrocious then the paddles all will clash,
And your drummer drops the sticks on which the big drum they must bash,
Then the old sweep loses balance and the boat will surely crash.

You can't say this!
What a shame coach!
We'll have to find you
Another approach.

If the colder and the bolder of the older paddlers say,
That the water is to freezing and there's definitely no way,
That their bodies will all thaw out cause their lips are very blue,
Knees are knocking, goose bumps growing and their teeth are chattering too.

With the final fast approaching and no paddlers are in sight,
And the officials are all frantic because this line was hard to write,
Then you may as well keep reading and hope for something good,
'Cause there's one more verse still coming, owing, pending, understood.

If the timing isn't rhyming with the pining of the team,
And the comments from the judges are unnecessarily unclean,
Well it doesn't take a genius to work out something isn't right,
Could it be that Dragon Boaters will be drunk again tonight? 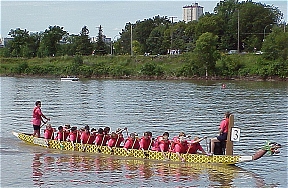 Let this be your good deed for today... it only takes a second.
Go to the site below.
All you do is click a button and a woman somewhere gets a free mammogram at no cost to you.
It is paid for by corporate sponsors (who gain advertising in the process because you see their logo.)
All you do is go to the site and click on the free button.
It takes one-second. However, you're only allowed one donation so pass the word.
www.thebreastcancersite.com

Please visit our
ONLINE SCRAPBOOK
to see our team in action.