THE BILL HILLMAN GUITAR PAGES
~ Guitars I have known... and owned ~
... and lost!

In the mid-80s I had traded video equipment for the earlier version of the Roland synth the G-303 -- from friend and fellow-musician Ken Storie...but soon after I traded in this system for the "new improved" 700 series. The G-303 is the only guitar I have ever traded or sold, but the cost of the new system (well over $4000) forced me to part with it as a down payment. Before trading it in I removed the b-bender and Bigsby... and re-installed the Bigsby onto my Gretsch Country Club. Ever since this early experience with guitar synths I've had a fascination for them. I've put some of the info on the Roland systems into the following site which I hope will provide some reference for pickers sharing a similar interest.


HISTORY OF THE
ROLAND GUITAR SYNTHESIZERS

The Early Years
In the late '70s / early '80s  the Roland Corporation pioneered innovative developments in the field of guitar synthesis and they have been improving on this technology ever since. I entered the world of guitar synthsizers in the early '80s via the GR-300 system and have been intrigued by them ever since - so, even though there have been many attempts at guitar synthesis over the years, this website is devoted to those I am most familiar with: the Roland line. 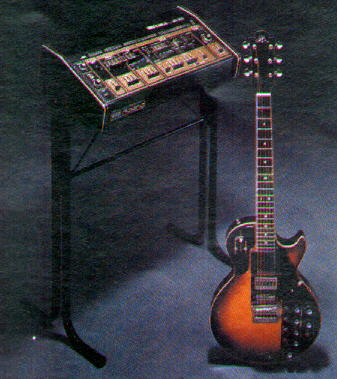 The GR500 system in.1978 was Roland's first attempt at guitar synthesis. It consisted of the guitar controller (GS500), a 24-way cable and the synthesizer unit (GR500). The Japanese-made guitar was based on the Gibson Les Paul shape but with more controls and different pickups.

Roland released a second generation of synth systems in 1980 - the GR-100 system. This included three types of guitar controllers in many different finishes: the G505 - a  Tele style with three single coils, the G303 - a Gibson SG derivative - and the delux version, the G202 with dual humbuckers was a Strat-shaped cross between the G505 / G303 and the G808. All of these controllers could operate the GR100 or the later GR300 synthesizer units via a 24 way cable.

This system generally did not track well, forcing the guitarist to play slowly, deliberately and precisely.

The blue GR300 has six VCOs (one per string) that are controlled by the string pitches as well as hexa-fuzz plus an LFO, tuning presets and some control over the attack of each note. The decay of each note is controlled by the way you play the guitar and this makes the system far more versatile than it first appears. As one of the sound sources on this unit are now true VCOs then a few new techniques become available. First it is now possible to apply vibrato to open strings, secondly each string can now produce two notes (one from the divided pickup and one from a VCO). The pitch of the VCO's can be offset by two preset controls that can be selected by footswitches. Envelope attack can be slowed down and the strings that will have a synthesized tone on them can be individually selected. There is a compression on / off switch but unfortunatel the infinite sustain of the GR500 was dropped. Many of these functions can be selected by footswitches and the state of these are indicated by LEDs that flash if the function is off or steady if the function is on.

The guitar controllers for the GR300 were the same range that were offered for use with the GR100. The controls on the guitars now allowed control of VCF frequency and resonance, guitar / synth balance, oscillator / hexa-fuzz selection and LFO on / off through the use of two concealed touch plates. All this was achieved on guitars that looked very conventional, however examination of the back of the guitar shows that there is a large amount of electronics inside it.

Released at the same time as the GR300 system was a bass guitar synth, the GR33B, with G33 and G88 controllers. The system worked in a similar manner to the GR300, although the pitch presets were replaced with better envelope controls.

The improved tracking of the GR-300 combined with the GK1 and BK1 pickups offered clean and fast tracking which allowed guitarists much more versatility in their playing. The system is still considered one of the greatest guitar synths ever manufactured despite the limitations of the synthesizer engine due to its minimal filter and envelope settings. Both Andy Summers and Robert Fripp have praised the G303 guitar as a perfect marriage of the guitar with synthesizers.

One of the things that made the GR300 and GR33b guitar and bass units so playable and attractive to guitarists was the series of controllers Roland offered. Controllers include a number of models that were fashioned after popular guitars by major companies. All the Roland guitars were made at the Fuji Gen Gakki factory, under contract to Roland. The Fuju Gen Gakki factory also built guitars for Ibanez, and made the Fender Made-In-Japan guitars as well!

After the perfect tracking of the GR300/GR33b series Roland went on to create new floor units that were a huge leap forward in their synthesis technology. Unfortunately they also abandoned the tracking system that made the 300/33b such a useful and playable instrument. These silver monsters are great synths but the tracking systems inside them is mediocre compared to the previous generation.

The G33 and G88 bass controllers had exaggerated double cutaway bodies. An actual Fender P-bass type body was also available for a while. Roland GR-808

MIDI
The GR-700 features a MIDI Out jack. By connecting the GR-700 with another MIDI-equipped instrument, such as Rolands MKS-10, 30, or 80, you can control the connected instrument by playing a guitar controller.

The G707 was noticeably different from the others as it added a stabilizer bar running from the top of the neck to the bottom. This was created supposedly to defeat "dead spots" on the guitar where a neck might not send full tracking info to the floor unit. The G707 came in three colors: Silver, Red, and Black. The G707 was a great guitar in its own right and I often use my Silver model on stage with or without synthesizer.

See our special G-707 guitar section for much more information on this system
http://www.hillmanweb.com/hillgt13.html 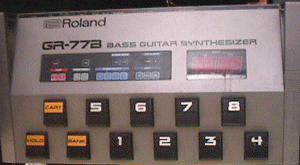 The G77 was the bass equivalent of the G707 guitar and
also had a stabilizer bar and came in Silver, Black, or Cream. 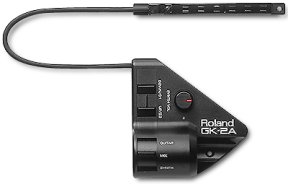 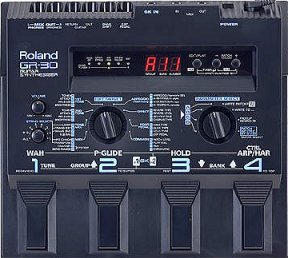 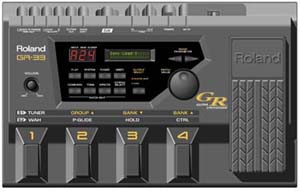