Well, in Brandon the secret is out, as close to 400 people show up for the "First Annual Brandon Blues Festival" Sept. 6, 2002. What started off with just a few friends talking about a little get together so we could hear our friends play and have a drink or two, ended up as a full-fledged festival. I would like to say it all came off without a hitch, but if you have ever put on an event, you know it never goes without a few bumps along the way.  Festival organizers Jan Chaboyer and Brent Chamberian went above and beyond and sacrificed some sleepless nights to make this an event Brandon blues lovers will remember for some time.

The event was to take place at Hydro Park, a lovely site along the Assiniboine River, that on a beautiful summer night would have been just perfect.  Site one was not to be as the overcast sky threatened rain. We did have a backup indoor hall rented also but as calls for more tickets kept coming in the hall would not be big enough -- site two down.  With just hours before the start of the first act I think Jan called in a few favours and we moved into the main dining hall at the Brandon University. Even more tickets were sold at the door as many University students discovered they didn't have to go far for great beer drinking music (just like all the beer commercials) ... The Blues.

"Poorboy Rodger" got the evening going with the debut of my lap slide style as Kelly Joe Phelps and Harry Manx have been a big influence on me as of late. With my harmonica rack on, I sounded just like a guitar player with a harmonica!  Well, being the only solo act of the evening I wanted to get a big sound.

Winnipeg's Strident Harpies showed off their acoustic stylings for all the Delta blues fans.

GB Peech & the Sidebanders has become a real crowd pleaser in Brandon. Now with Robin Hillman on bass their bottom end has tightened up and is a real asset to the band.

Robin stayed on the stage to join his parents Bill & Sue-On Hillman as they took control. With Bill's gritty vocals and skilled B-bending guitar the blues take on an original sound that fits well with Sue-On's hauntingly beautiful voice.

Christie Ghidoni & the Band finished off an all too short night and just knocked my socks off! Christie had pulled together some of Brandon's finest musicians, Jim Andrey on drums, Vaughn Thornsteinson on bass and guitar, Kelsey Schoonbaert guitar and Adrian Kuryliw on too many instruments to mention! With Christie just starting her music career (she's just nineteen I think) she should go far if she sticks to it.

I almost forgot to mention two of the most important persons at the festival, Larry and Darlene Henry, who pretty much missed all the music as they were outside barbecuing hundreds of hamburgers and hot-dogs, our take on the blues fish fry, with no charge for all the hungry fans (you can't beat the price.)  So I know Jan Chaboyer, festival organizer, would like to thank all the volunteers, sponsors, musicians and you, the blues fans, for making this a big success and hope to see you at the Second Annual Brandon Blues Festival next year. 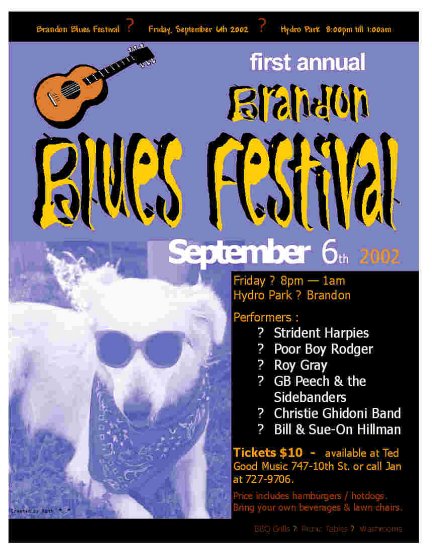 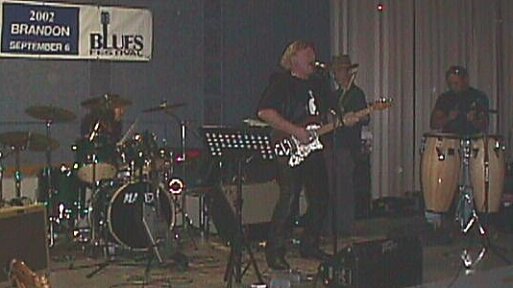 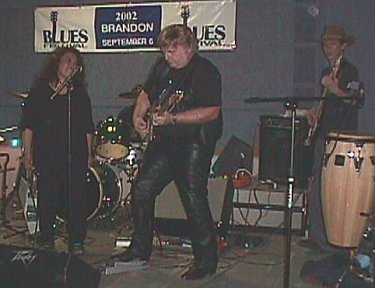 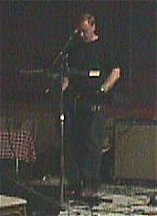 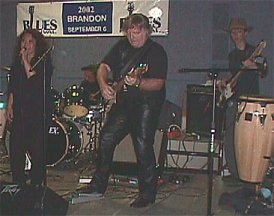 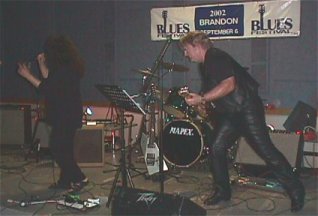 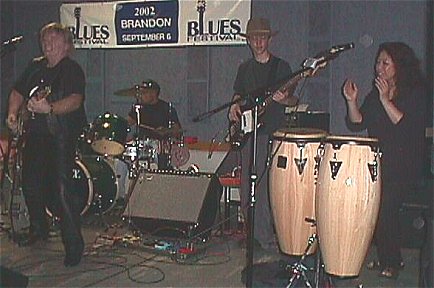 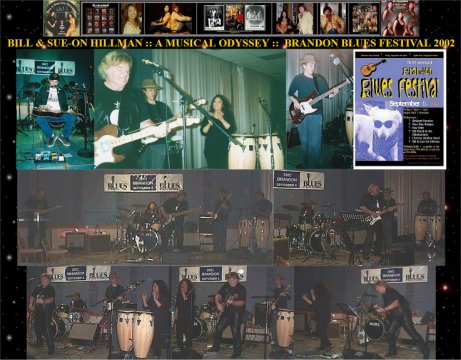 FROM OUR BRANDON UNIVERSITY SITE