After years of  building b-benders and using Bigsbys, volume pedals and echo delay to eke out a few steel guitar sounds, it was only natural that someday I would pick up a real steel. This steel was manufactured in Winnipeg by long-time steel player Wayne Link.

I then got all the manuals, a few instruction tapes and struggled with the bar, pedals, knee levers, 12 strings and weird tunings in my attempt to learn a few tunes like Danny Boy. But since we were doing so much stage work . . . and since it is very hard to front and sing with a trio while playing steel . . . I gradually drifted back to my Tele imitations.

About this time I had also bought a Fender Rhodes 88 electric piano to double on . . . and most stages just werent big enough for all of us. The other multi-stringed instruments in the above photo are our daughter China-Li's harps -- again, too many strings for a guy so used to six strings.

THE STEEL GUITAR was invented in Hawai`i by a Hawai`ian, Joseph Kekuku, in the late 1800s. By the end of WWI it had worked its way into country music and though it appears in other settings, these are the two types of music where it is most often heard. Steel guitars are a small family of instruments closely related to the six string Spanish guitar. They may look quite similar (though not necessarily), but the playing technique is different in two important ways: steel is played with a steel bar held in the left hand, and the string height is such that instead of pushing a string down with the left hand to fret or shorten it at a particular fret, the string is barred or touched with the steel to raise its pitch. To make this easier, the original steel guitar was held in the player's lap, and the electric ones are often referred to as a 'lap steel'. Most steel players use a plastic thumb pick and three metal finger picks on the right hand although some use two or four; many Hawaiian players use a thumb pick with bare fingers and a few steelers (mostly converted guitar players) use a flat pick.

While the very first acoustic steel guitars had bodies much like the Spanish guitar, a special off-shoot of  acoustic guitar, the resonator guitar first appeared in the 20's and is still popular today. Resonator guitars were primarily made by two companies: National and Dobro. Just to confuse matters more, Dobro makes instruments with both a 'Hawaiian' neck and a 'Rhythm' neck, although the term Dobro usually refers to an instrument meant to be played with a bar, and 'rhythm' neck refers to a Dobro with a fingerboard fretted like a standard guitar.

There is no one standard tuning for the steel guitar and the solid body electric steel allowed for instruments to be made with two, three and even four necks, each tuned differently. Multiple necks made holding the instrument on the lap almost impossible, and legs were added, making the first 'console' instruments, although a few single neck consoles were already being played by 'steelers' who preferred to stand. At the same time, the steel picked up two more strings (there were a few seven string steels) and by the end of WWII the double neck eight string console was fairly standard, although even today there are still many players who prefer a single neck six or eight, especially in Hawaiian and Western Swing music.

In the early 50's several players began experimenting with adding pedals which raised the pitch of a string, and in 1953, Bud Isaacs was the first player to use a pedal steel guitar on a hit recording: Slowly by Webb Pierce. The sound quickly caught on and many steel players converted to playing the 'pedal sound' For over a decade almost every steeler had his own tunings, but in 1964 Buddy Emmons started to use a steel guitar with two ten string necks, one tuned to 'chromatic E9' (the 'Nashville' neck) and the other to an extended C6 (the 'jazz' neck). This quickly became the standard and is probably the most popular setup today. As the technology improved, knee levers (functioning like pedals) were added along with the capability of double raising and lowering a string (having two different pitch changes on the same string on different pedals). In the late 70's Maurice Anderson started using a single 12 string neck with a 'universal' tuning which produced many if not all the sounds available on the double neck 10 string. Although there are a few exceptions, most of today's pedal steel pros use some variation of the E9-C6 double 10 or a Universal 12 or 14 string. The standard beginner's pedal steel is a single ten tuned to E9, with three pedals and one or two knee levers. 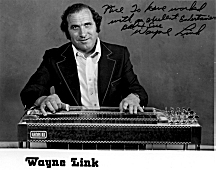 Steeler and manufacturer of the Link II

Martin is, by far, the oldest guitar company around today. It was founded in 1833 by Friedrich Martin in New York.

Les Paul, up until the early 1930's, played jazz under the alias "Rhubarb Red".

The world's first, commercially available solid body, electric guitar was the Fender Broadcaster. It only shipped in 1950. In   1951, Fender was forced to change its name to the Telecaster due to the claims that Gretsch previously had rights to the Broadcaster name.

The last of the gut strings were replaced by 1946

The world's smallest, playable guitar measures in at 10 millionths of a meter (about the size of a red blood cell).

Steve Vai's signature amp, the Legacy, is made and sold by Carvin.

Leo Fender was an interesting man to work for. No matter how good one did, it rarely met his standards. However, despite  him driving his employees as hard as he did, they loved him. It has been said that some employees even worshipped him.

Steve Vai definitely  isn't afraid of signature products. His arsenal includes a series of signature guitars, an amp, a wah pedal, and even signature cables.

Before his solo career, Steve Vai toured with Frank Zappa as his guitarist.

The Dreadnought style of guitar was designed by Frank Henry Martin and Harry Hunt in 1916, but Martin didn't begin selling them in full force until 1935. The name comes from a British battleship which means "fear nothing".

Fender once pushed an ad campaign called "You won't part with yours either". In one ad for the campaign, a skydiver was featured while in free fall and holding a Fender guitar.

Tip: It's far better to practice for 2 half-hour sessions a day than a solid hour per day. Don't overdue it.

Tip: It's very important to maintain and clean your guitars. Human oils and other grime can ruin your favorite possessions!

Tip: Use a metronome while practicing scales. It's better to build up your timing than inaccurate speed.

Tip: Scales are not only useful for building speed, but knowledge of scale theory will also help one with writing solos.

Tip: Heat can damage guitars. Be sure to keep your guitars away from heat as much as possible!

Remember: No amp, guitar, or effect sounds better than any other. How good something sounds is subjective, and not a fact.

Because of Eric Clapton leaving, Jeff Beck joined the Yardbirds in 1965.

The world's first store to sell guitars only opened in 1957 in Tarzana, near Los Angeles.  The store was opened by the man with the idea, Ernie Ball.

Since its birth in 1946, Fender has continued to be one of the world's most popular guitar companies.

Danelectro was known quite well for their pickups which resemble lipstick cases. However, the pickups didn't actually  resemble anything -- they  literally were lipstick cases! They were bought from a cosmetic company and converted into pickups.

Beekeeping is one of Steve Vai's many hobbies.

Ovation acoustic guitars were started in the late 1960's with a parabolic, fiberglass body. The shape/material was chosen due to its great sound. Charles Kaman, Ovation's founder, was worried that hardened guitarists wouldn't pick a guitar that was so untraditional. However, we still enjoy Ovation's products even today.

Leo Fender sold Fender to CBS in 1965. He continued to work at Fender until 1970, at which point he became a partner of Music Man. Leo's personal cut from the CBS buyout was a whopping $13million.

In late 1980, Grover Jackson met with Rhandy Rhoads (then little known) to design a model for him. At the time, Grover had already built up the Charvel name. When the guitar was finished, Grover created Jackson guitars specifically for Rhoad's guitar. The idea was that if the guitar flopped, it wouldn't tarnish Charvel's name. Of course, the guitar was wildly popular and thus, Jackson was born.

An ad campaign to promote the Rich Bich (by B.C. Rich) featured a model in a controversial pose and was featured in Playboy. The poster itself sold over 30,000 copies, and generated enormous publicity for this otherwise little known company.

Although guitar amps didn't become popular until the 1950's, they have actually been around since the 1930s.

Naked women and guitars? You know it! Gibson was commissioned in 2000 by Playboy to produce 2000 limited edition "Playmate" guitars. The Playmates were priced to own at only US$7,000 a piece.

Carvin got its name in 1946 when its founder, Lowell Kiesel, combined his two oldest sons' names, Carson and Gavin.

Gibson submitted a design patent for the Flying V on June 27th, 1957.

Les Paul loved to experiment with guitars. His first "electric" guitar creation was made by jamming his mother's phonograph  needle in to the top of a guitar.

Despite the Great Depression, Gibson adjusted and produced the "Kalamazoo", an inexpensive flat-top guitar. Even as people  were fighting to afford food, Gibson still lived on.

In 1941, Gibson's plants were actually used for production to help with the war.

The Thunderbird, by Guild guitars, featured a built-in stand in the 1960's. The stand was located in the back of the guitar's body. The built-in stand wasn't very popular, and was removed from the model before the 1970's.

Up until April 1st, 1918, Martin actually used elephant ivory for bridges, bindings, and various trim on many of their guitars.

In 1980, Leo Fender and George Fullerton started G&L Music Sales. Today, it is often said that G&L produces guitars of superior quality to Fender, which Leo founded decades before.

B.B. King has given up on standing at his concerts. He now prefers to sit.

The sides of acoustic guitars are made by soaking a piece of wood. It is then bent over a heated pipe

Fender once pushed an ad campaign called "You won't part with yours either".  In one ad for the campaign, a skydiver was featured while in free fall and holding a Fender guitar.

Clear-body guitars have been around for quite some time. The first was invented by Ampeg in 1969. Ampeg wanted to create   guitar with great sustain, and plastic was the best choice.

In the 1930's, Epiphone was the most respected guitar company in America. Ironically, Epiphone was bought by Gibson in 1957, instead of the other way around.

B.B. King originally played gospel music, but later switched to blues due to the fact that it's far more lucrative.

Gitarre Spielen has been going strong since its birth on March 22nd, 1997. 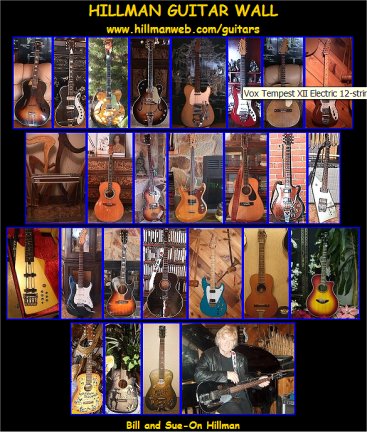